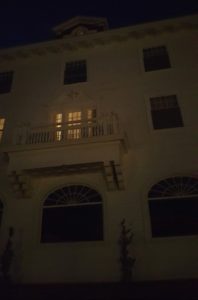 When I wrote about my experience at the Stanley Hotel history and ghost tour, I was quite skeptical regarding the existence of actual spirits. While I did feel intense energy in certain parts of the hotel, it wasn’t enough to convince me. However, on Memorial weekend of 2017, I made reservations to stay the night. I chose the most famous room of them all — room 217. This is the room where horror author Stephen King once stayed. His adventure at the Stanley inspired him to write his famous horror novel called The Shining.

Experiences that occurred during my stay has fully convinced me that ghosts are real entities.

Over the years, there have been many reports of ghost activity occurring in room 217. Some guests say they leave the room and when they come back, they find their luggage somehow unpacked. There are others who claim to have seen shadows passing through walls. In addition to these claims, there are other bizarre and unexplained experiences reported.

Many believe that the activity comes caused by a woman named Elizabeth Wilson. She was the first maid employee at the Stanley. In the early 1900’s, she was involved in a very serious accident while she was working in room 217. A gas leak lead to an explosion, which caused her to fall through the floor. Fortunately, the mishap had only caused moderate injuries.

Ms. Wilson died in the 1950’s. However, according to reports, she occasionally visits room 217. 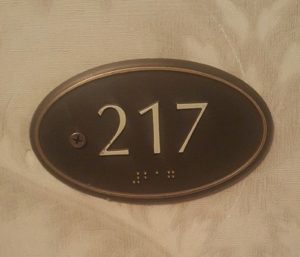 After my partner and I had arrived at the hotel room, we decided not to unpack any of our luggage. Instead, we left room in hopes that we might come back and find our luggage unpacked. However, when we came back to our room, there was nothing out of place.

What We Thought Was A Cart By Our Door: Occurred Around 8:00 p.m.

After staying in for a while, we decided to head back out and grab a couple of things from the grocery store. Then we came back to the room and chose to stay in for the night. The time was around 8:00 p.m. when out of nowhere was what clearly sounded like a cart right outside of our door. The noise prompted my partner to instantly go and check the peephole to see exactly who or what was out there. What was quite shocking is that there was no one there.

If my partner didn’t immediately look through the peephole, I would have thought that someone must have came to a nearby room and walked in. He could have easily missed seeing them come by. However, this wasn’t the case. Of course, this experience was a rather unusual one. However, it wasn’t something that could easily turn a skeptic into a believer.

Reaching Out To Ms. Wilson

It was about 11:00 p.m. when we thought it would be a good idea to actually reach out to the spirit of Ms. Wilson. Other than the sounds of an invisible cart that was outside of our room, there was nothing that could make me fully convinced that Ms. Wilson, nor any other ghost actually exists. Our luggage was never unpacked, and we didn’t see any shadows passing through the walls. We gave it one last shot before we went to sleep. In an attempt to reach Ms. Wilson, I said to her: “If you are really here with us, prove it.”

A Loud Noise In The Middle Of The Night: Occurred Around 2:30 a.m.

The most profound experience of the night happened at around 2:30 a.m. While we were both asleep, we were woken up by an extraordinary loud noise. If I were to describe the noise, it was almost as if someone had taken an enormous object, and then slammed it to the floor with extreme force. What’s even more odd is that in addition to my partner and I, there were other hotel guests near our room who also woke up from the noise. The reason I am so confident in saying it was the noise that had woken them up is because a couple of moments after my partner and I woke up, we heard people whispering and talking to each other.

An Explanation For The Noise?

The next morning after a long and creepy night, I woke up and noticed that there was my partner’s 20 oz. bottle of Mountain Dew on the floor. I asked myself: “How could this bottle have fallen to the floor in the middle of the night?” Besides just our shoes and luggage, there was nothing else was on the floor. Of course, the bigger question was how the bottle could have caused such a loud noise capable of waking up several people at the hotel. The only answer I could come up with is that it had to have been a ghost, or perhaps Ms. Wilson herself.

The Guests Who Heard The Loud Noise

Below is information on the three guests who heard the incredibly loud noise in the middle of the night. Luckily, I was fortunate enough to get the chance to actually speak with two of them.

One guest stayed in a room directly above ours. She said she was woken up by a loud noise at around 2:30 a.m., which she reported as the sound of a “large barrel” that had hit something.

Although I did not get the chance to directly speak to guest #2, according to guest #1, she stayed in room 324. I was shocked to hear that she also had heard the loud noise.

While my partner and I were about to leave the hotel, there was a young man who wanted to talk to us about a few things. He first told us he stayed the night with his father in room 326.

Besides mentioning that he took some images of orbs, which he said were actually floating outside of room 217, he had something even more interesting to share with us. He said he woke up some time in the middle of the night from what he described as a “loud boom.”

The time was approximately 4:00 a.m. when I woke up again. However, this time it was very quiet and my partner appeared to be in a deep sleep. It was just a minute or two later when I heard this creepy chuckle that sounded like a woman who was laying right next to me. This was yet another paranormal experience that confirmed my belief that ghosts actually exist.

I hope you enjoyed reading about my paranormal experience that occurred at the Stanley Hotel in room 217. While many might believe that what I experienced that night was nothing but a little trick that my mind was playing on me, the fact is that they were not there. In addition to the sounds of the trolley and the woman’s bizarre giggle, no one can explain the loud noise that caused my partner and I, plus others to wake up in the middle of the night.

If you ever get a chance to visit the Stanley Hotel, at the very least, you will want to check out their fascinating history and ghost tour. If you plan on staying the night, there are several rooms that are known for being haunted. You may want to make your first choice —room 217.

Read the full story on OdditiesBizarre. The names of the guests who heard the noise, as well as a direct comment from one of them can be found in the full story.